MOVING ABROAD WITH CATS: HOW OUR TWO MAINE COONS LIKED THE MOVE TO BRUNEI

We didn't even question the fact that we were going to bring Hugo and Cricket when Andreas got the job offer in Brunei. When we first decided to get cats back in 2012 we agreed that they'd be indoor cats only from the start, so to make an eventual relocation easier for both them and us.

We tried to figure out early on what we needed to do in order to bring the cats with us. We found helpful information via the expat community in Brunei, and realized we would have to renew their vaccines and get rabies shots for them within a certain time of the move. We also found out we had to get an import permit from the government. What made tings more complicated for us was that we didn't exactly know when we would move, since we were waiting for the results of Andreas work permit and visa application. We contacted a firm in Brunei  - MOC Sdn Bhd, a logistics company that could help us with receiving the cats at the airport there and applying for the necessary documents.

Unfortunately it wasn't until we tried to book tickets for the cats that we realized how complicated this part was going to be. This led us to engage another firm to handle the whole trip for us. This was now quite late in the moving process and Andreas was already in Brunei when we decided to use PetRelocation for this purpose. They are situated in Texas and proved to be very helpful. Even with the extra help it took us about 5 weeks to get everything in order and get the cats to Brunei. This was party due to the time difference between Brunei - Norway - Texas.

PetRelocation had contracted local company - Trust Forwarding  - to handle the pick up from our house in Stavanger and check in on the cats first flight to Copenhagen via Oslo. On the day of the pick up  - last Wednesday - I prepared their travel kennels (size medium - suitable for dogs up to 14 kg) and reluctantly put the cats in there. It felt rather horrible not knowing how they would do the coming days until I would see them again, but I told myself we had done everything we could to make this trip as comfortable as possible for them. The cats flew Stavanger - Oslo - Copenhagen where they had a rest at a "pet hotel" over night until they continued in the morning to Brunei via Singapore where they had a 2 hour layover.

When they arrived in Brunei they were first moved to a quarantine facility in Bandar Seri Begawan - the capital - since it was Friday afternoon and our local agent couldn't pick them up at this time. We were aware of this and had tried to get them on a flight that would arrive on any other day than a Friday, but that seemed to be almost impossible. On the day after - this was a Saturday - they were picked up and transported by car to the quarantine facility closest to us, by the border to Malaysia, 30 minutes drive away from where we live. We went to see them there as soon as we got informed that they had arrived and was met by two rather stressed and confused cats. After some cuddling, cleaning and preparing of the quarantine kennel they were pretty calm, but warm. Saturday was a really hot day in Brunei and our very furry friends were not used to it. We noticed that both of the cats were panting and breathing with their mouths open. We had bought a AC unit for the kennel but since the kennel has a external wall made only of netting this wasn't as effective as we had hoped for. We decided to call a veterinarian to check them up and made an appointment for Sunday. We stayed with the cats until it got a bit cooler in the evening and tried to cool them down with water.

The vet we met on Saturday gave the cats some medicine to help boost their immune system and reduce the panting but wasn't really worried about them in regards to the heat, since he believed they would adapt after a while.

This quarantine facility is of the type where the pet owners have to take care of the pets on a daily basis - there is no one there to feed them or clean up after them - so we have to go there everyday to look after them. This first week we are also giving them medicine twice a day so I drive there in the morning and afternoon to hang out with them for a while. I'm pretty sure I would have done that even if someone fed them, so I'm fine with that. They are definitely doing better after a few days of acclimatizing, although Cricket seem to be a bit slack. Surprisingly it is Hugo who have handled this time in the quarantine best, although considering his heath is generally better i guess it's not so strange, even though he is the shy one of the two. Cricket hasn't much of an appetite so she will most likely come out of this experience a bit thinner than before she left. Which probably will be good for her, in the end, considering her being overweight.


Hugo and Cricket are supposed to be in the quarantine facility for a month before they can be moved home for another 5 months of "home quarantine" - which just means they have to stay inside just like they have their whole lives, but with a quarantine officer checking in on them every now and then. We are - with help from the vet - going to apply for permission to move the cats home earlier since they are having some problems with the heat. I really hope we get to do that...

To wrap things up - what would I have done different if I had to do this again?

Some people have asked me why we just don't leave the cats behind and get new ones here. And knowing they will have to be in quarantine for up to a month has made me question this as well - but of course we couldn't. For us the cats are family. And knowing how resilient they are and how well the have coped with changes before I'm sure we did the right thing. Now I just want to get them out of there and home with us so that the new normal life can start for all of us.
Upplagd av Magpie kl. 00:20:00 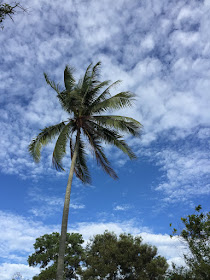 Come on, let's go is a blog about two Swedes, Annika and Andreas, who lived the past 6 years in Norway and now got the opportunity to move to Brunei. The blog is about moving, experience new things and adapting to a new everyday life on the other side of the world.